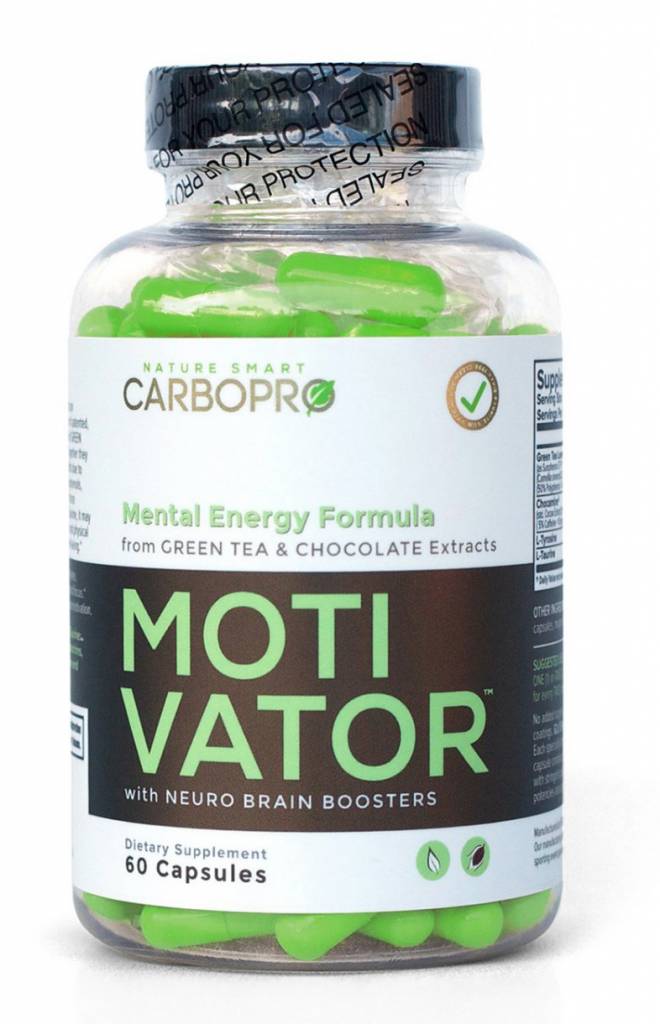 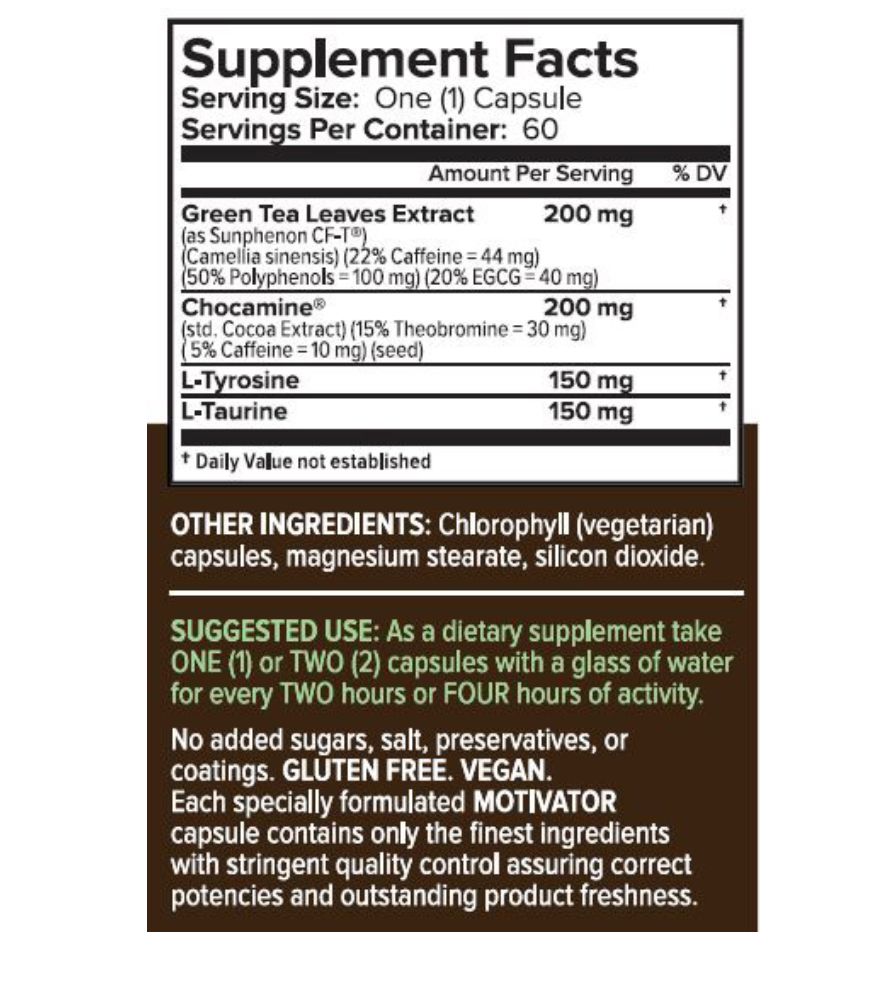 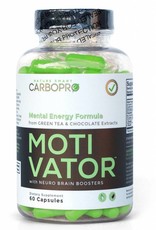 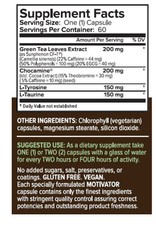 NEW AND IMPROVED MOTIVATOR is an energy formula that can enhance mental and physical performance.* It combines the power of patented, registered and certified extracts (granted full GRAS status by FDA) of GREEN TEA LEAVES (Sunphenon® CF-T) and CHOCOLATE (Chocamine®). Together they naturally provide caffeine, and an array of amazing benefits due to their unique ingredient profiles as they are rich in antioxidants, polyphenols, catechins, EGCG, xanthines, anandamides, amino acids, and other trace nutrients. Reinforced with pharmaceutical grade L-Tyrosine and L-Taurine, it may be a natural way to energize the body and mind, support cognitive and physical performance, increase fat metabolism, and promote health and well-being.*

MOTIVATOR can be used by power, strength, and endurance athletes, or used during any prolonged activity for sustained mental energy and focus.* A large part of training and racing is MENTAL, its about brain energy and motivation.

SUGGESTED USE: As a dietary supplement take ONE (1) or TWO (2) capsules with a glass of water for every TWO hours or FOUR hours of activity.

KEEP OUT OF REACH OF CHILDREN. STORE IN A COOL DRY PLACE.

WARNING: Do not use this product if you are pregnant or nursing or if you are at risk or are being treated forhigh blood pressure, heart, kidney, thyroid, or psychiatric disease, difficulty in urinating, prostateenlargement, anxiety, depression, seizure disorder, or stroke. Consult your healthcare professional beforeuse if you are taking antidepressants, MAO inhibitors, or any other prescription drugs. *The statements on this label have not been evaluated by the Food and Drug Administration (FDA). This product is not intended to diagnose, treat, cure, or prevent any disease.

MOTIVATOR contains a scientific blend of thermogenic and energizing ingredients plus neurotransmitter precursors: Green Tea Leaves extract (22% Caffeine), Cocoa Extract (providing Theobromine), L-Taurine and L-Tyrosine. You can experience the synergy of these choice ingredients to Perk up before exercise, or fire up during exercise, or you may take it as a pick me up anytime for a blast of energy.

MOTIVATOR’s Green Tea Extract contains 45% EGCG, a particular polyphenol that may promote fat loss and support weight management by increasing energy expenditure. By increasing your overall metabolic rate, green tea can be used in combination with exercise to assist and increase fat-metabolism and provide energy for exercise activity in the process. Sunphenon C-FT® Green Tea Extract also contains  22% of natural caffeine which can help increase energy. The addition of caffeine to the potent mix of catechins revs up your production of noradrenaline, pumping you with enough feel-good confidence to take on tough tasks and terrains. MOTIVAOTR provides 44 mg of Caffeine per capsule from green tea leaves extract (Sunphenon C-FT®).

Numerous epidemiological studies show that regular consumption of green tea or its extract has a net positive effect on overall health. Even as a supplement, green tea can be a worthwhile addition to your dietary habits, especially if your goal is fat loss. The primary difference between drinking tea and taking it in capsule form is dosage which in supplement form is typically much higher.

The second key ingredient in MOTIVATOR is Chocamine®, a potent, highly purified extract derived from the cocoa bean, which delivers amazing cognitive support, mood enhancement, appetite control and increased energy; all without the calories that would come from eating chocolate. Chocamine is the only patented and GRAS (generally regarded as safe) certified cocoa-based supplement that offers an array of amazing benefits due to its unique ingredient profile, rich in antioxidants, polyphenols, xanthines, anandamides, amino acids, and other trace nutrients. If you are looking for a natural way to energize the body, stimulate the mind, reduce cravings, and increase feelings of well-being, Chocamine will deliver impressive results.

The powerful powerful antioxidants, trace amines, xanthines and anandamides in Chocamine work synergistically to increase alertness, enhance stimulation, support mood, and supercharge the body. One of the main components of Chocamine is Theobromine, a highly specific xanthine related to Caffeine, which delivers the same stimulant properties as caffeine, without the edginess usually associated with caffeine use. Chocamine delivers potent stimulation and powerful cognitive support, without the edginess or jitters associated with other energy products.

L-Taurine is a free-form amino acid that participates in a variety of metabolic processes. Taurine is a neurotransmitter, a neuromodulator and is involved in glucose uptake. It's a component of bile acids, which are used to help absorb fats and fat-soluble vitamins. Taurine also helps regulate the heart beat, maintain cell membrane stability, and reduce brain cell over-activity. Taurine is found in meats, fish, milk and eggs, but not in vegetable proteins.

L-TYROSINE:   Tyrosine is an important amino acid that is a precursor to a number of neurotransmitters related to our feeling of well-being. A deficiency of these neurotransmitters will result in low moods and a reduced ability to cope with stress. Studies have indicated a marked increase in ability to deal with stress, as well as improved endurance to anxiety and stress under fatigue when supplementing with Tyrosine. Studies have also shown that Tyrosine supplementation results in increased performance while under stressful conditions. Besides helping with multiple other functions, Tyrosine is important because of its ability to convert to the mood elevating neurotransmitters, norepinephrine and dopamine, in the brain. Additionally, Tyrosine converts the thyroid hormone to adrenaline which is produced by the adrenal gland in response to stress. Supplementation helps in the process. Tyrosine improves motivation, drive, and concentration. A Study (Deijen JB, et al Department of Clinical Neuropsychology, Vrije Universiteit, Amsterdam, The Netherlands) noted that Tyrosine improves cognitive performance and reduces blood pressure in cadets after one week of a combat training course. Findings suggest that supplementation with Tyrosine may, under operational circumstances characterized by psychosocial and physical stress, reduce the effects of stress and fatigue on cognitive task performance.