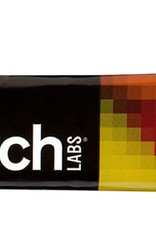 This ain't your parents drink mix.  And unless you put yourself into extremely challenging conditions, it might not be yours, either.

For the last two years, we’ve been making a secret drink mix that is extremely high in sodium to over-hydrate or “hyper-hydrate” athletes immediately before they put themselves in grueling situations where they end up sweating more than they can possibly drink.

Given its purpose, we called the product our Hyper Hydration Drink Mix and kept access to it limited to only our most hot and sweaty customers – NASCAR drivers, fire fighters, and a handful of professional runners and cyclists. We weren’t trying to be elite by limiting the product’s access. Rather, we had legitimate concerns about the product’s taste and worried about what might happen if the product was used inappropriately or without hands on instruction.

So for almost two years, we tinkered, studied, and worked carefully with a cast of characters – some very fast, others slow, but all extremely smart & sweaty - to evolve our formula until we reached a point that we felt, when used as directed, the product was safe, effective, and palatable for the general athletic population to use as a method to preemptively hydrate before events known, or with the potential, to elicit severe dehydration.

It took us a while, but we felt it important to take the time and care. As part of that diligence, we want to emphasize that our Hyper Hydration Drink Mix is not a sports drink or a “use every time you exercise” product. More to the point, this product is not intended for casual hydration. In fact, we encourage you not to use our Hyper Hydration Drink Mix until you finish reading this blog, talk to your coach, health care professionals, visit google, and give your individual situation and this product some real consideration. It may not be for you. But if you decide it is, then our experience has been that it’s probably exactly what you’ve been looking for.

When it’s hot or more appropriately when we get really hot, whether it’s through intense exercise or from baking under a garish sun, we sweat to cool our bodies. Without that sweat and the evaporative cooling that comes with it we can overheat and literally start cooking ourselves from the inside out, which isn’t exactly good for either performance or one’s health. Unfortunately, as we sweat we also dehydrate, losing precious water and salt, both of which are critical for normal bodily functions. It’s a bit of a catch 22. Either overheat or dehydrate or both – all of which are bad.

While the body is almost 60% water by weight, a 70 kg person doesn’t have 42 liters (1 kg of water = 1 L of water) of water to spare to keep them cool. Depending upon the situation (airflow, temperature, work intensity), exercise performance can suffer with as little as a 2-3% drop in body weight due to dehydration. By the time someone loses 10% of body weight from dehydration (7 kg or 15.4 lbs for a 70 kg or 154 lb person), it’s likely that they are critically ill or very close to it. Unlike stored fuel in the form of carbohydrate or fat, we’d kill ourselves before we even came close to tapping into all of our water reserves.

In addition to thinking about total body water, it’s also important to realize that the water stored in our body isn’t all in one big reservoir. About two-thirds (2/3) of it is inside our cells (intracellular space) while the other one-third (1/3) is outside of cells (extracellular space). Of the water outside of the cells only one-fifth (1/5) of it is in the circulatory system as plasma in the blood (intravascular space), while the other four-fifths (4/5) lies in the space between blood vessels and cells (interstitial space).

The net result is that for an average person our blood volume is only about 5-6 liters, with only about 2.5-3 liters of that being water or plasma. Because maintaining that small plasma volume is critical to keeping our cardiovascular system functioning and precious oxygen flowing to our cells, it’s very easy to see how quickly even a small amount of dehydration can affect performance and thermoregulation (i.e., the maintenance of a stable body temperature).  Although, our body can quickly shift water from one body space to another to maintain central blood volume and blood pressure, in the heat or during heavy exercise, sweat rates can easily reach rates as high as 2-4 liters per hour, which puts an incredible strain on our total body water reserves and on the availability of water in our cardiovascular system. One way to think of it is that in an hour or two of intense exercise in the heat, our bodies need to find a way to replace almost all of the water in our blood.

Equally important, however, is the fact that the water in our plasma or blood isn’t just water – it’s more of a salty soup, containing about 9 grams of sodium chloride per liter (3.5 grams from sodium and 5.5 grams from chloride) – an amount that is similar to the sodium concentration in chicken noodle soup which comes in at 3 to 4 grams of sodium per liter.  Since the water in our bodies or more specifically in our plasma is so salty, the fluid that enters any one of the two million sweat glands across our skin is also salty. In fact, while a number of electrolytes like potassium, calcium, and magnesium are also lost in sweat, sodium chloride makes up the overwhelming majority of the electrolyte loss in sweat. For this reason, electrolyte loss in sweat is really synonymous with salt loss. More importantly, it’s the loss or dilution of sodium, not chloride, that negatively affects our physiology – a phenomenon called hyponatremia that can result in a host of problems that range the gamut from fatigue, confusion, headache, nausea, muscle cramps, seizures, and in rare cases death. Because of these potential issues, getting a handle on the concentration of sodium in sweat (i.e., “sweat sodium”) and replacing that sodium in addition to water, instead of water alone, when dehydrated from heavy sweating is paramount to performance and survival.

Unfortunately, getting a handle on the amount of sodium we lose in sweat isn’t that easy. Unlike the relative ease of estimating water loss through changes in body weight using a simple bathroom scale, measuring sweat sodium requires expensive and less accessible equipment. When sweat sodium is measured, however, incredibly large differences between individuals are found, with sodium concentrations ranging from 300 to 2000 mg per liter of sweat with a median somewhere between 700 to 800 mg per liter. The bottom line is that the sodium concentration of sweat is not a “one size fits all” phenomena.

The reason behind this massive sweat sodium range is primarily genetic. When sweat first enters the sweat gland it has the same sodium concentration as blood at 3500 mg per liter (3.5 g/L). But as that sweat moves through the duct or lumen of the sweat gland towards the surface of the skin, small channels inside the duct reabsorb, on average, two-thirds of the sodium. But like many physiological attributes, the number and performance of these sodium specific channels is highly individual with a genetic basis that explains most of the extreme range in sweat sodium concentration. Non-genetic factors, however, can also affect sweat sodium. These factors include heat acclimatization (spares sodium), training (spares sodium), the sweat rate in and of itself (increases in sweat rate increase sweat sodium loss), body weight and shape (a low body surface area to mass requires more sweat), and dietary sodium intake (increases in dietary sodium increase sweat sodium loss).

Together, these genetic and non-genetic factors explain why some of us are consistently covered in white salt at the end of a long day of exercise while others are not. They may also explain why some more easily exhibit signs associated with severe dehydration and hyponatremia like cramping, nausea, fatigue, heat stress, and headaches after a prolonged period of heavy sweating despite the use of a sports drink.  Ultimately, whether someone knows their sweat rate or sweat sodium, these collective signs are a real world and real time barometer that are extremely important to pay attention to and understand.

If you’ve paid enough attention to yourself during prolonged endurance exercise or during any activity that causes you to sweat at unreasonably high rates then you probably already have a pretty good sense of whether or not your current hydration strategies are adequate. But as a point of self-review, ask yourself the following questions:

1.     Do you find yourself in situations where you sweat way more than you can drink?

2.     Are you having problems figuring out how you’re going to get enough fluid during an event?

3.     Do you compete in very intense events where you simply can’t get anything to drink?

4.     As a result of sweating way more than you can drink or not having enough to drink, do you find yourself losing an excess amount of body weight (e.g., more than 5-7% in a single bout)?

5.     Do you end up feeling like total crud, especially relative to others, during or at the end of sweaty exercise in the heat? Feeling like crud might include headaches, nausea, irritability, muscle twitches, uncontrollable cramps, and poor performance and excessive fatigue.

7.     Do you think or do people tell you that you sweat a lot more than everyone else around you? For example, has any ever asked you, “Why are you sweating so much?” Usually, little kids ask this a lot.

8.     Do you get really light headed all the time when you’re training hard and suffer from excessively low blood pressure?

9.     Do you feel better when you’re constantly popping salt pills during an endurance event and are you getting tired of popping all those salt pills? Would you rather eat a bag of chips, drink miso soup, or gnaw on pickles? Seriously, are you always craving salt?

10.   Is it common for you to get so dehydrated that you end up in a medical tent or a hospital getting IV hydration?

There’s a possibility that you think these questions are crazy and that you answered “no” to most of them. If that’s the case and none of the issues listed above are a problem for you, then you can stop reading. Our Hyper Hydration Drink Mix isn’t for you and you don’t need to waste your time and money to try it.

On the other hand, if these questions resonate with you and you feel like you’ve just locked eyes with someone standing off in the distance - someone who really understands you, then we may be on to something. Despite our irrevocable propensity for jocularity (i.e., we like to laugh at ourselves & keep things funny), this really isn’t a laughing or joking matter. Severe dehydration resulting in both water and sodium loss can be very dangerous. But so can loading up on a lot of water and sodium that you don’t need, which is essentially the solution that we’ve come up with to help all of