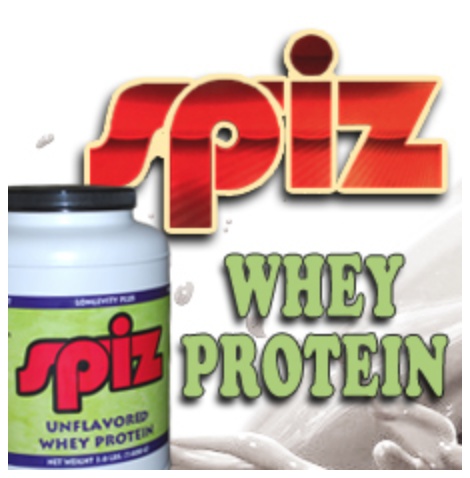 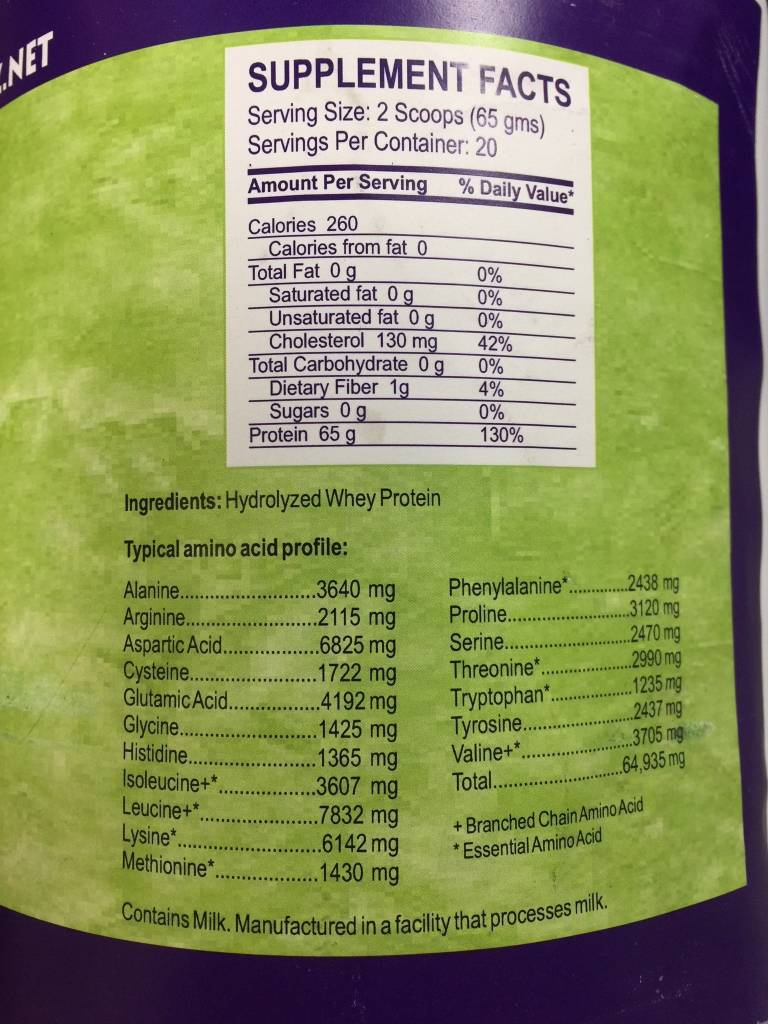 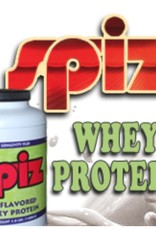 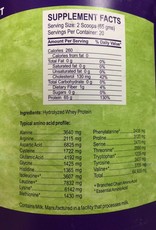 Many years ago when I re-made Ultra Energy into SPIZ, I selected a “hydrolyzed” whey protein as my protein source because whey is the highest quality dietary protein based on its excellent amino acid profile and easy digestibility. In the ensuing years research into whey protein has continued to strengthen my initial impression that whey is simply the best protein source to improve performance in athletes of all types.  It can help build and maintain muscle mass and strengthen as well as assist those with catabolic illnesses trying to prevent loss of lean body mass, improve immune function, detoxify and improve antioxidant function. One-sub-fraction of whey has been found to stop bone catabolism and may reverse osteoporosis. This product is called “milk basic protein” and consists of 54% lactoferrin and 41% lactoperixidase and a few other proteins and is approved in Japan as a “functional food” ingredient in tofu and natto. Adding whey to fermented soy…..Hmmm!  That should give you a bit of insight into a comparison of whey protein to soy protein coming later on in this review.

Depending on the type of whey protein selected, any or all of these health and/or exercise performance objectives can be achieved. This “primer” will review what is known about whey protein, the importance of its source and processing, how it improves performance and immune function and the differences between whey concentrates, isolates and hydrolysates . Proof of its superiority over casein or soy protein will also be presented.

Whey protein is one of three types of proteins found in dairy, the other being casein and “milk basic protein” which is actually a sub-fraction of whey. Whey proteins are being studied for their ability to have a positive effect on nitrogen balance, which is the chemical element that makes protein different from carbohydrates or fatty acids which contain carbon, oxygen and hydrogen only.  Certain whey proteins can have profound effects on immune function and can reduce inflammation in the body. Although milk allergy and/or lactose intolerance is fairly common, one form of whey is essentially free of both these issues and can be used by anyone without risk of GI tract distress or allergic response.

Whey is a byproduct of cheese manufacturing. The fat (“curds”) are filtered from the milk as is much of the other milk protein, casein. The remaining product is a whey protein “concentrate” which also contains a 5% solution of lactose in water, some fats, minerals and different types of lactalbumin.  If not heated (pasteurized), whey concentrate is “undenatured”, and is in its most biologically active, immune stimulating form and is 40 – 85% protein by weight. For those who are lactose intolerant, this form of whey is more likely to provoke a GI tract reaction. Likewise those whose who are allergic to milk will have an allergic response to whey concentrates due to the many intact protein structures.  Whey concentrate contains a mixture of beta-lactoglobulin (65%), alpha-lactoglobulin (25%) serum albumin (8%) and immunoglobulins such as lactoferrin, lactoperoxidase and glycomacropeptide which are all very beneficial to the immune system.

Recently research published in the journal PLoS One found that breast-fed children are more protected against cancer than formula-fed children. The alpha-lactoglobulin referred to above combines with oleic acid which is found in babies stomachs. The combined protein is called “Human Alpha-lactalbumin Made LEthal to Tumor cells“ (HAMLET) and can effectively kill cancer cells for years to come. HAMLET can also trigger cancer cells apoptosis pathways, which is programmed  cancer cell death.  A pilot study of bladder cancer patients who had a HAMLET solution injected via a catheter found it killed cancer cells and shrunk tumors within 5 days.

Interestingly, human mother’s milk is 60% whey and 40% casein. Cow’s milk is 20% whey and 80% casein. This ratio difference suggests humans do better on whey protein than casein protein, which is problematic for another reason. There are two types of casein that differ by one amino acid. Milk from Bos Taurus subspecies of cows which includes Holsteins, Ayshsires and Frisians produce A1 beta casein while milk from humans, goats and Guernsey cows contains A2 beta casein. The vast majority of cows in the Western Hemisphere produce A1 beta casein. A1 beta casein is highly inflammatory and has been shown to provoke an autoimmune response. It has been found that many cases of Type I childhood onset diabetes is linked to cow’s milk consumption containing A1 beta casein, which sets off an autoimmune response that destroys the beta cells in the pancreas that make insulin.

A1 beta casein results from a genetic variation at position 67 of the casein 209 long amino acid structure.  A1 beta casein has the amino acid histidine at this point while A2 beta casein has the amino acid proline instead. This results in a 7 amino acid peptide called “casomorphin-7” (BCM-7) being cleaved off the A1 casein, a process that does not occur with A2 beta casein. BCM-7 is an opioid resistant to degradation and creates rampant oxidative stress in the gut and blood stream as well as a strong immune response. BCM-7 can cause “leaky gut syndrome” with digestive disorders and is itself absorbed and circulated in the blood.  It can cross the blood brain barrier causing a number of neurodegenerative changes. BCM-7 injected into rats has been shown to cause autistic and schizophrenic type behavioral changes. It can cause reduced GI tract motility and constipation and is most damaging in infants who naturally have increased intestinal permeability. Giving cow’s milk containing A1 beta casein to infants under age 2 would not be a good idea for these reasons alone. However, the story of casein gets worse!

Studies of A1 beta casein consumption and the incidence of coronary heart disease in populations of many countries around the world has shown a strong correlation between the two. The reported correlation coefficient between the two is 0.76, which is as high as the correlation coefficient between smoking with lung cancer. Now correlation does not prove causation, however studies of dietary intake of A2 beta casein and childhood diabetes and adult onset coronary artery disease shows NO correlation. By the way, research has found that cheese, yogurt and fermented milk products like kefir from A1 beta casein containing breeds produce around the same amount of BCM-7 as regular milk. The graph below illustrates the dietary A1 beta casein/heart disease link:

It is theorized that BCM-7 oxidizes LDL cholesterol (OxLDL) which accumulates in the arterial wall and is the mechanism of how A1 beta casein contributes to coronary atherosclerosis.

Casein is also a much slower absorbing protein in the intestinal tract relative to all forms of whey, hence is less desirable from the standpoint of getting branched chain amino acids to the muscle cells as quickly as possible during or after exercise,  even if one had access to A2 beta casein which in the USA is very difficult if not impossible.

I recently had a discussion with the owner of the Organic Pastures dairy in Fresno, California that is the only raw, unpasteurized milk producer in this state. In discussing the A1/A2 beta casein controversy, his feeling was that the science behind it is not settled, and the real issue for milk (and therefore whey) producing cows is whether they are grass fed or not. Grass fed cows lead to far healthier milk, and therefore a better protein content. The SPIZ whey protein does come from grass fed cows in New Zealand, which is another reason is it superior.

When whey concentrates are treated through the another process called “ion exchange” which denatures the protein and immunoglobulins with heat, and/or microfiltration the resulting end product is a whey isolate that is mostly, but not completely free of lactose. The ion exchange process literally wipes out all the valuable and health promoting sub-fraction peptides except beta lactoglobulin which is the most common milk protein allergen. Hence this would not be a good product to consume for those with milk allergy. Whey isolates contain 85 -90% protein that are absorbed faster than a whey concentrate. Like whey concentrates, they are mild to slightly milky in taste.

Whey is THE most abundant source of branched chain amino acids (BCAA’s) which are used to fuel working muscles and stimulate protein synthesis. The branched chain amino acids include leucine, valine, alanine and isoleucine, and have been also been found to inhibit the transport of heavy metals across the blood-brain barrier. In particular, the amino acid leucine plays a key role in initiating the transcription of protein synthesis. Adequate leucine intake is required to speed recovery and help with adaption to exercise. Since high intensity and/or prolonged aerobic exercise,  or heavy weight training results in protein catabolism in the former and micro muscle tears in the latter, replenishing protein during and immediately after exercise is critical to a faster recovery process and maximizing training effects.

Another factor to remember is the contribution of protein to total energy expenditure in long distance sports such as cycling, running, swimming, triathlon and so forth, which has been measured at 5 to 15%.  This can make the difference between winning and losing, or a good versus bad competitive performance if not addressed properly.

Leucine is one of nine so called “essential amino acids” that can only be obtained through the diet.  In one study of 26 untrained healthy men aged 20 – 36, half received 4000 mg of leucine and half a placebo. Twice weekly all subjects were supervised by professional trainers in 8 standard weight resistance training machines with strength testing before and after 12 weeks. At the end of the study the placebo group increased their maximum five repetition weight resistance ability by 31% while the leucine group increased by 41%, a 10% greater improvement with just leucine.

If one takes a whey protein isolate and further treats it with heat and acid, the whey is degraded into much smaller peptide units called di and tripeptide amino acids. This process mimics our own digestion, hence the term “predigested” and the peptides are actually absorbed more rapidly than free form amino acids. Hydrolysis is an easy way to further purify the whey and remove the last vestiges of lactose, milk fats and immunoglobulins. The resulting whey “hydrolysate” is 90 – 95% pure protein and is now in its most easily digestible form, and will be absorbed in the small intestine more quickly than whey concentrates or isolates. Those with lactose intolerance will have no issues with a hydrolyzed whey protein as virtually all the lactose is removed. Additionally those who have true milk allergy will be able to digest hydrolyzed whey protein without problem because the above mentioned beta lactoglobulin is hydrolyzed (digested)